… the Large Dark Olive hatches are usually well under way by then. Early in the season the hatch only lasts for half an hour or so in the middle of the day but the hatches can be intense and the trout rise to the flies like they’ve waiting all winter for them, which they have.

Here’s my two favourite dry flies for this hatch. The first is a no-hackle dun tied with snowshoe rabbit wings, so let’s call it a snowshoe no-hackle. 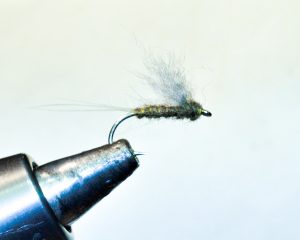 I tie it on a size 14 dry fly hook for the large dark olives but the colour and size can be varied to match any hatch of upwings. If you find it too fiddly to tie with snowshoe rabbit, you can tie the wings with blue dun polypropylene yarn (I use Aero Dry Wing). ). It will still work, it just doesn’t float quite so well.

Thread: Whatever is in the bobbin holder
Tail: a small bunch guard hairs from a hare’s body
Body: Fur from a hare’s ear/hare’s mask
Rib: flat gold tinsel (Uni tinsel stands up well to chewing by trout)
Thorax: Hare’s ear/mask with some body hair mixed in to give it extra spikiness (fox squirrel works well too).  Pick out the fibres with a needle.

If you want the fly to float well in faster water you can tie in a bunch of snowshoe rabbit (or cdc, if you insist) before dubbing on the thorax.

If you haven’t tried it before then give it a go, you might be surprised how good it is and you can get the added satisfaction of catching fish on a fly that has worked for more than a hundred years- probably longer.

SHOP OUR ON THE FLY T-SHIRTS

Visit our shop for our Fly Fishing Maine T-shirts

SHOP OUR ON THE FLY T-SHIRTS – (VARIOUS COLORS AND SIZES)