Springtime on the Irish Loughs 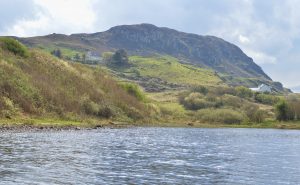 By far the most important factor in fly-fishing for wild brown trout in Irish lakes is the weather, at least for the big lakes anyway. The smaller lakes can respond better in less than ideal conditions. The kind of day you are after would be heavily overcast, with a moderate breeze; preferably from the south or southwest, so that the air is warm and humid. The strength if the wind is crucial. If there are flies hatching then a lighter wind is preferable, and if there is a light drizzle so much the better as it stops the hatching flies from drying their wings and keeps them sitting on the water for longer. In the absence of a fly hatch then a stronger wind is better and helps cover the deceit while fishing blind with wet flies.

In reality late April/early May is usually cold with dry winds from the east or north. And so it was this year. Apart from a few days it was 9-10 degrees centigrade or so (not sure what that is in Fahrenheit but trust me it’ was cold especially with the wind blowing strong from the north). Not ideal conditions, so I arranged to fish some smaller lakes in County Donegal at the end of April. First off I was on New Lake, which is interesting for a few reasons, firstly it’s a lake not a lough (which is the Irish for lake).

There are only a handful of “lakes” in Ireland and the clue to why this one is a lake is in the name. New Lake was formed relatively recently (1920s or 1930s – I can’t remember off the top of my head) when a big Atlantic storm blocked off the sand dunes and the water behind the dunes formed a “new lake”. People were speaking English by then, so it became a lake not a lough. Anyway the nature of the formation of the lake means that it is shallow all over and being based on shell-sand it is less acidic, both of which lead to a fertile invertebrate-rich lake with luxuriant weed growth which is unusual in this part of Ireland.

I was here for the hatches of lake olives, which can be prolific at this time. The olives were there ok but the fish were reluctant for whatever reason probably the cold, I got a few but not the quality of fish the lake is renowned for. So I abandoned New Lake and fished some other loughs in the region. Purt and Sessiagh. They were much better. A mixture of olives and large numbers of terrestrials, black gnats and hawthorn flies, had the fish looking up and eager to pounce on small wet flies. No big fish but a steady stream of fish from 9-12″ made for fun days out. Small black wet flies and hare’s ear nymphs did most of the damage but I had a few on dries and emergers too.

Next stop was Lough Mask, one of the big loughs in the west of Ireland. Mask, like it’s near neighbours Corrib and Carra, lies on a bed of limestone giving good hatches of flies and an abundance of subsurface food. Again the hatch of lake olives was the draw. The olives favour shallow weedy areas and the bay I had chosen to fish was just that. The olives were there in huge numbers, with a few fish rising despite the less than favourable conditions. I fished with hare’s ear emergers and occasionally with nymphs and got a few good fish the first two days. The final day I gave up as it was wall to wall sunshine with a strong cold wind and by lunchtime I had seen nothing rise (see what I mean about the weather) They are tricky on the olives so I was pleased enough.

The bigger Mask fish in the picture would be called a gillaroo around Lough Mask, but scientific opinion is that Gillaroo is a strain of brown trout unique to Lough Melvin. They maintain their genetic integrity by spawning only in the outflowing river rather than in the feeder streams.

Gillaroo is a corruption of the Irish and roughly translates as “red fellow”, and so they are; a rich golden yellow with lots of big red spots. They are beautiful trout and if you fish tight in among the stones on Lough Melvin then virtually all of the trout you catch will be gillaroo.

The “mayfly” is up now so I shall report back in due course .

SHOP OUR ON THE FLY T-SHIRTS

Visit our shop for our Fly Fishing Maine T-shirts

SHOP OUR ON THE FLY T-SHIRTS – (VARIOUS COLORS AND SIZES)